Since his boyhood, Zack Engle has always enjoyed nature and the outdoors. He spent most summer weekends camping out in the back yard in a tent. Years later, after discovering teardrop campers and then building three of his own design, he said camping has become a lifestyle.

His third build – the X-Cubed Camper – incorporates the best of the best of what he’s learned from the earlier builds and from other teardrop builder/campers along the way. Zack said he settled on the unusual name because it was his third build and it has an angular profile. Also, it’s built more ruggedly and sturdily for boondocking in the mountains of Northern Pennsylvania.

“I've always loved to get out into the woods and cook some food over an open fire,” he said. “During high school and college I didn't need much of an excuse to toss a tent and a sleeping bag in my car and drive down to the beach for a weekend. Pitching a tent at Assateague Island National Seashore was a lot cheaper than getting a hotel, and a lot more relaxing than the hustle and bustle of the boardwalk. When I wasn't headed to the beach, I was exploring dirt roads in the state forests, often getting rained on and washed out.

“Sometime in the mid-2000s, I was on spring break from college and driving through Arizona. When I pulled into a gas station in the middle of the desert I noticed a really cool little camper being towed by a small SUV. Immediately I was thinking that I needed a little camper so I could get up off the wet ground and have a dry place to keep my gear.” 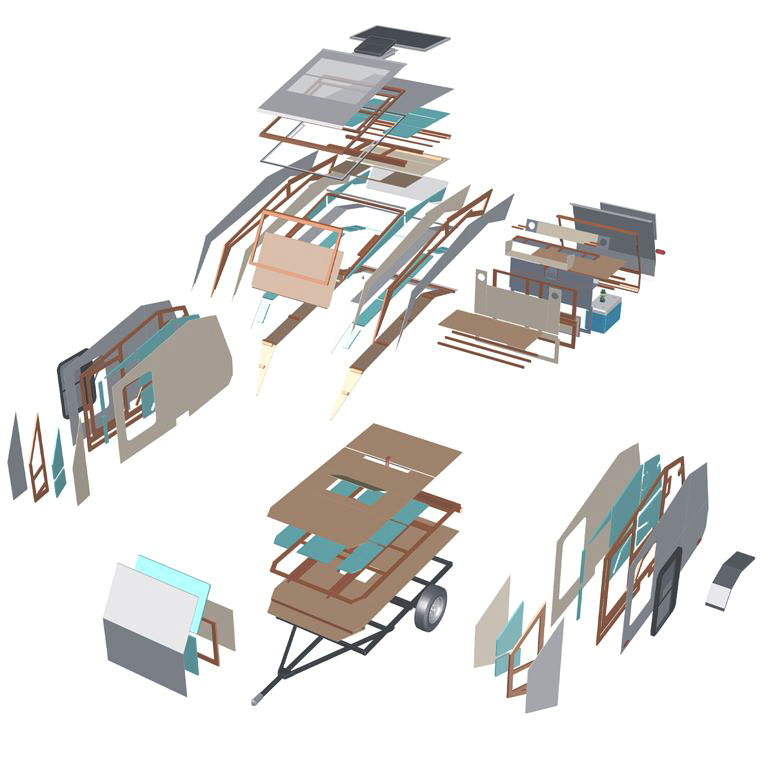 Upon returning, he determined through online research that the little red and white camper that he saw at the gas station was a $20,000 T@B. Since that was way out of his price range, he started “scheming and dreaming, wondering” if he could build something small, lightweight, and inexpensive. The ideas really started flowing when he searched for teardrops on the Internet.

“In the winter of 2009 I finally had some time, money, and a place to build my first teardrop camper,” he recounted. “It was a 4x8 teardrop with a removable vinyl roof, loosely based on some plans I found online. It was a pretty basic teardrop trailer, with a small battery, some LED lighting, and a foam mattress. It was basically a glorified tent on wheels, but it was comfortable and dry.”

After two seasons in his first teardrop camper, he sold it finance a bigger and better teardrop. The second trailer also featured a screened-in, removable vinyl roof, but was 5x9, had more LED lighting, more storage, a stereo system, and a basic solar setup. After using that teardrop extensively over a couple of seasons he got the itch to design and build another.

“They say the third time's the charm, and I have to agree. While I really loved both of my first builds I wanted something less whimsical and more rugged with the new design. I wanted something completely different and totally outside the box. It still had to have the design principles of a teardrop trailer -- compact and lightweight, sleeping two, and with rear galley -- but with a more aggressive appearance.

“After a few months of toying with many different profiles, design cues, and features, I finalized the new plans and had a complete 3D AutoCAD model as reference to start making sawdust.

“Having no welding skills, this new design was based on a 5x8 bolt-together trailer kit, with a few simple modifications. I sold the brand new leaf springs and axle from the kit and ordered a custom Dexter torsion axle, which easily bolted onto the frame. I also purchased a piece of 2x2 square tubing from a local metal supplier and used it to strengthen and extend the trailer tongue. To help tackle some mild dirt trails and give the design a more proportional appearance, I upgraded to much larger wheels and tires. Many ask why I didn't just have someone build me a full custom frame, but a custom frame doesn't come with the paperwork that many states require as part of the registration process.

“I still wanted to have the open feeling that my first two convertible teardrop campers had. Many teardrops are quite dark and can feel a little claustrophobic, so the X-Cubed has two large acrylic skylights in the front section of the flat roof. This front section is also hinged at the top to open up if we really want to sleep under the stars.

“Inside the cabin, there are no cabinets. Cabinets take up space and limit flexibility. Instead there is simply a shelf with a removable rail to keep things from falling during transit. This lack of cabinets also helps contribute to the openness of the interior. Compared to a traditional teardrop, it’s like sleeping in a cave. At the front of the memory foam mattress is a headboard with padded denim-covered doors that slide open to reveal an electrical panel with charging ports, the 12VDC/120VAC power center, and also some storage. All the LED lighting, inside and out, is controlled by remote-control key fobs.

“The galley isn't very traditional either. The lower galley has enough room for four 50-quart coolers, or any combination of storage containers, coolers, and even a small generator. The upper galley has a couple of shelves to keep bread and buns from getting smashed and the galley counter is deep enough for divider compartments and plenty of prep space. Two granite tiles act as trivets, keeping hot cast iron from melting the countertop. The galley also acts as the entertainment hub with a marine-rated CD player with Bluetooth connection, which drives speakers inside and out.

“With all that room in the lower galley, provisions were made so that we can carry and operate a 5,000 Btu air conditioner for use where electric hookups are available. Fresh-air intake and hot-air exhaust vents have been cut into the galley floor, and the air conditioner blows cold air into the cabin through one of two passage doors that are in the lower galley bulkhead. When boondocking, our Beagles use the openings as their personal doggy-doors to get in and out of the camper on their own, as they want.

“On the exterior we have two 100-watt solar panels - one mounted on the roof and the other mounted on the rear hatch to power the two 100ah batteries that hang in a cage below the camper floor. The walls and roof are built using sandwich-panel construction -- 5mm plywood, 3/4" stick framing with rigid insulation and 5mm plywood. The exterior is finished with Kilz Primer and oil-based roll-on enamel paint. The black paint on the fenders and around the base of the camper is brushed-on rubberized bedliner.”

Zack, 36, of Hanover, Penn., now shares The X-Cubed with his fiancé, Jenn, and two Beagles. He’s been a member of the Liberty Bell Chapter of TearJerkers since January 2009.  As one of chapter’s youngest active members, he has been an administrator with the club since 2011 and has helped out as co-director since 2014.

“If it weren't for the TearJerkers I never would have met Jenn,” he said.  “I first met her parents when I was showing the X-Cubed at an outdoor show with the Liberty Bell Chapter in 2014.  They happened to have a little fiberglass Scamp camper and decided to join the TearJerkers.  We camped together many times and in 2016 we had a gathering not far from their home.  Jenn joined us for the potluck dinner and we really hit it off. We're getting married on June 14.

Last winter, Zach and Jenn restored a classic 13-foot 1976 Serro Scotty Gaucho, completely stripping it down and rebuilding it from the ground up.  It was a seven-month project and still needs a few finishing touches.

Solving problems one at a time results in great teardop build